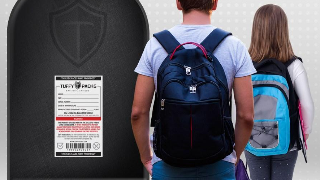 The Walt Disney Co. is asking a maker of bulletproof backpack inserts featuring Disney princesses and Avengers characters to stop selling the items, saying it hadn't authorized the use of the characters.

Sadly, demand for bulletproof and bullet-resistant backpacks and related products are soaring in the U.S. this back-to-school season amid growing fear about mass shooters.

"None of these products were authorized by Disney, and we are demanding that those behind this stop using our characters or our other intellectual property to promote sales of their merchandise," a Disney spokesman said in a comment to CBS MoneyWatch.

The backpack inserts appeared to have been removed from the maker's site. As of Wednesday afternoon, the backpacks sold at Tuffypacks didn't include any with the colourful Disney characters. Some inserts included Harry Potter characters, which Warner Bros. told the entertainment industry website TheWrap.com it hadn't endorsed or licensed. Tuffypacks didn't immediately return a request for comment.

The inserts, which sell for US$129, fit into school backpacks and are designed to protect their wearers from bullets, according to Tuffypacks' website.

The rise in mass shootings has sparked demand for bulletproof and bullet-resistant backpacks just as back-to-school shopping picks up. But the products are also sparking criticism from lawmakers as well as parents, with presidential hopeful Kamala Harris writing on Twitter, "Parents shouldn't have to buy a bulletproof backpack for their child just to keep them safe at school."

Tuffypacks isn't the only maker of bulletproof backpacks and other school-related gear. Stores are reportedly selling out of the items, which can cost as much as US$500. Office Depot and OfficeMax are among the retailers offering these products, which have gained interest after this past weekend's mass shootings in El Paso, Texas, and Dayton, Ohio.

Sales of bulletproof backpacks have soared, with Texas-based ReadyToGoSurvival.com saying its sales have tripled to 300 backpacks per month. The company told the Houston Chronicle that the people buying the backpacks aren't survivalists, but "normal upper middle-class, and upper-class professionals."

It may be stating the obvious, but there is nothing normal about kids and parents believing they need bulletproof backpacks to be safe at school.

AL - July 3, 2020 @ 12:42
Very good point on behalf of Disney. It is scary that the consequence of the shootings is not the introduction of stricter rules on the possession of weapons, but the sale of bulletproof backpacks which even don't provide proper protection. If someone want to buy some body armor may visit https://acelinkarmor.com/.