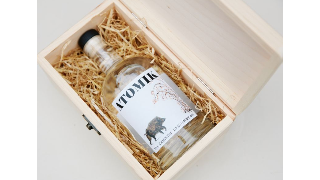 If you were perplexed as to why some thrill seekers have this strange fetish about visiting Ukraine's Chernobyl, the site of the worst nuclear reactor explosion in 1986, you're really going to be scratching your head as to why anyone would make a vodka with ingredients from its exclusion zone.

Scientists from Ukraine and the University of Portsmouth in England created "Atomik", a vodka made from grain and water from the Chernobyl exclusion zone – the area where radioactive contamination from nuclear fallout is highest and public access and inhabitation are restricted. And, thanks to the distillation process, they say it’s safe to drink.

It may sound strange and, sure, there's shock value, but there's a legitimate objective behind the project, which also happens to be a silver lining -- the team's newly-founded Chernobyl Spirit Company is planning to begin a first phase of small-scale production of "Atomik" this year, and wants to give 75% of the profits back to the communities affected by the disaster.

"I think this is the most important bottle of spirits in the world because it could help the economic recovery of communities living in and around the abandoned areas," said Jim Smith, who led the project.

For more than two decades, authorities have maintained the 15-kilometre radius exclusion zone around the reactor, including the city of Pripyat, once home to 50,000 people.

The team of scientists brewed the vodka as part of a three-year research project into the transfer of radioactivity to crops grown in the Chernobyl exclusion zone.

Even today, Smith says that the crops in the exclusion zone are still above the Ukrainian radiation limit for consumption, so they can't be eaten.

But although radioactivity was detected in the grain used to make the vodka, researchers said the distillation process reduced impurities to an undetectable level, and the drink is safe to consume.

"When you distill something, lots of impurities stay in the waste product, and the final product is more pure. And that's what we found with our vodka --we fermented the grain then distilled it. We found that we couldn't measure any radioactivity in the product, except natural carbon 14 that you find in any spirit drinks, or any food," he said.

Only about 150 elderly people still live in the exclusion zone, in defiance of authorities. Officials say it will only be safe for humans to permanently live there again in 24,000 years, according to AFP.