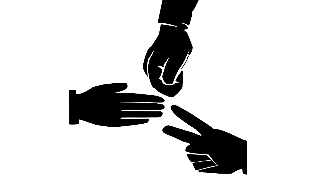 There are many ways to pass the time waiting for a plane to take off. But playing rock-paper-scissors with a tarmac worker through the airplane window probably wouldn't come to most passengers' minds.

Brianna Kolbe, recognized on Twitter as @bricheeseyy, shared a 7-second video of her boyfriend, Robert Meadows, playing the age-old game with Spirit Airlines worker Allain Bantaya at ACY as they waited for their flight to take to the air, adding the caption, "My boyfriend literally has no problem making friends with anybody…"

The video has gone viral, being viewed more than 15 million times and retweeted more than 300,000 times.

In an interview with Time, Meadows said he started playing the game because he saw the airport employee playing with someone else through the window.

"I like to be friendly because not a lot of other people are," Meadows, 23, told the publication.

The video generated some positivity on Twitter, as a few users replied letting Kolbe know this is the type of feel-good content they prefer to see on the social media platform, and many agreed the video made them smile.