Stealing Sand In Sardinia Could Cost You… 6 Years In Jail! 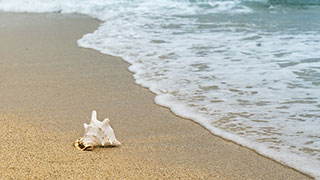 It's not uncommon for tourists to pocket a neat shell or dainty pebble as a memento of their vacation and probably, no one would know any better.

A colossal 40kg of mementos, on the other hand, and you're likely to raise some eyebrows.

A French couple who allegedly took 40kg of sand from one of Sardinia's pristine beaches did more than just raise eyebrows -- they're now facing between one and six years in prison for their negligence.

Border police found 14 plastic bottles filled with white sand taken from Chia beach stashed in the couple's trunk as they were about to board a ferry back to France.

The tourists told police they took the sand as a souvenir, oblivious to the fact that taking sand from a beach is an offence on the Italian island. Taking sand as a souvenir may seem harmless, but it can cause erosion to the island's coastline, a local environmental scientist told BBC.

Police said there's been a dramatic increase this summer in the quantity of sand, shells and other beach objects found in people’s luggage at the island’s airports, and Sardinian authorities are cracking down on the issue that has plagued the island for years.

People also risk fines of over $4,000, but police struggle to apply the penalties due to most culprits being visitors, making it difficult to collect the fines.

Vigilantes patrol the beaches and signposts clearly warn it is forbidden to take sand, but ignorant tourists continue to find beach grit to be an enticing booty.

Some sand thieves do see the error of their ways, however.

A man from Rome recently returned a bottle of sand he had stolen as a child in Cabras and a woman returned sand 29 years after taking it from Budelli, an island famous for its pink sand, saying she felt "guilty" after reading how the sand is made and its important to the ecosystem.

But Sardinia isn't the only place dealing with the sand smugglers: Hawaii has long struggled with tourists taking sand from its beaches and the pink sands of Elafonisi in Greece were a frequent subject of souvenir-taking by tourists until the Greek government declared the area a nature reserve and prohibited the sands' removal.