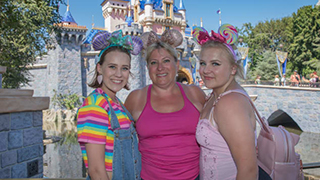 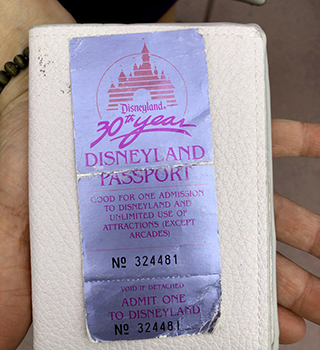 In 1985, Tamia Richardson was a 14-year-old high school student when she walked through the turnstile at Disneyland and won a prize: a free pass to Disneyland to use for a return visit.

The Alberta resident had won the ticket as part of a Disneyland promotion in celebration of the park's 30th anniversary -- the "Gift Giver Extraordinaire" giveaway awarded prizes to every 30th guest, and Tamia was one of the lucky winners.

Thirty-four years later, she was ready to cash in on her admission.

She has returned to the theme park several times since, but didn't remember the old promotional ticket until she recently opened up boxes of old photos and mementos.

Standing in line at the California park with her two teenage daughters, Richardson had no idea if the free ticket she’d won all those years ago was still valid.

"I was really hoping they'd take it," says Richardson. "I was less positive than more positive because it was pretty old."

As further proof of its authenticity, Richardson brought a photo that park officials had taken after she'd won.

If the park refused to accept her ticket, she'd have to pay almost $200 for a one-day pass (that same ticket went for around $20 in 1985), exceeding the school teacher's budget.

Turns out, this particular ticket to happiness had no expiration.

After a discussion among cast members, a supervisor returned to tell her the ticket was good for admission, but the announcement was tinged with a bit of bad news: Richardson had to relinquish her keepsake.

"I asked them if they could tear the stub and give me back the rest," she said. "But no, they had to take the whole thing. That was disappointing."

Richardson and her daughters enjoyed a park that is quite different from the one she saw in 1985, with new additions like Splash Mountain, Toontown and Indiana Jones Adventure.

But one thing hadn't changed: it was still The Happiest Place On Earth.