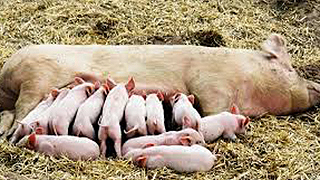 Pigs can’t fly – but apparently their semen can.

An extraordinary case involving the smuggling of pig semen in airline luggage has led to two men being jailed in Western Australia.

Two West Australian pig farmers involved in the smuggling of Danish pig semen, in breach of biosecurity and quarantine laws, were sentenced in the Perth District Court to prison terms totalling five years.

The pair arranged for semen to be collected from Danish boars and smuggled into Australia in passenger luggage carried by Danish nationals. The court was told that Laue, a Danish national, had advised the smugglers to hide the semen in shampoo and hand lotion bottles in a bid to avoid detection by quarantine officials.

The court heard that at least 199 sows were inseminated with the illegally imported semen, in a racket which continued for eight years, from 2009 and 2017. The enterprise spawned more than 2000 piglets.