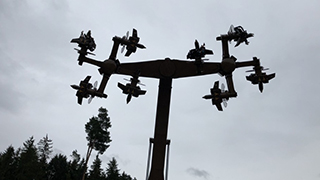 Here’s one for the “What were they thinking?” file.

A thrill-ride that resembled a giant spinning swastika has proved too much for patrons of an amusement park in southwestern Germany – and the park has now agreed to close it down.

The ride, called “Adlerflug,” German for “eagle’s flight,” will now be redesigned.

A video of Adlerflug in motion reminded onlookers of the notorious swastika symbol that became the emblem of Nazi Germany. The ride’s eagle-shaped cars were connected to the structure’s axis at an angle which makes sense from an engineering standpoint, but proved a bit too evocative.

After a social media backlash, the owners of the amusement park decided to close the ride immediately and redesign it together with the Italian manufacturer, German news channel DW News reported.

Rüdiger Braun, owner of the amusement park, apologized for the ride’s design and said it would be redesigned with three spinning eagles, rather than four, to remove the similarity to a swastika.

“Then we will have this problem under control,” he said.

Displays of the swastika are illegal in Germany.