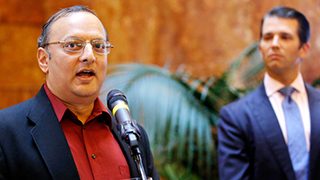 A Mississippi based hotel boss who had a short-lived partnership with Trump Hotels  is facing charges alleging he stole passenger luggage at Memphis airport.

Dinesh Chawla, CEO of Chawla Hotels was charged with felony theft of property after he allegedly took several bags off the baggage claim belt at the airport.

According to police arrest records, he was spotted taking a bag which he put into his car. He then returned to the departure terminal to catch a flight.

Police searched his vehicle and found "several bags that had been stolen." The bags "contained thousands of dollars of items."

Chawla Hotels has 17 hotels in Mississippi and had a short-lived partnership with Trump Hotels to introduce new brands Scion and American Idea. The Chawlas planned to develop the hotels while the Trumps would brand and manage them.