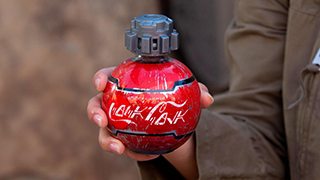 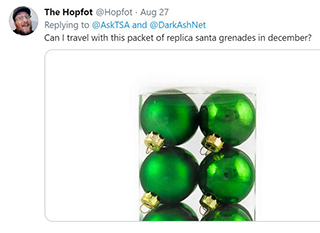 Some Star Wars fans are calling the U.S. TSA a party pooper after it banned a themed souvenir that is exclusively available within Disney's new Galaxy’s Edge parks in Anaheim and Orlando.

But the agency says they resemble a real explosive and has banned them from checked and carry-on luggage.

"Replica and inert explosives aren't allowed in either carry-on or checked bags," the TSA wrote on Twitter.

One desperate netizen tried to reason with the TSA and asked if they could still carry the collectible if the lid was removed – but TSA wasn't having it.

“Even with a normal bottle cap, this item is still considered a replica and is not allowed in carry-on or checked bags,” @AskTSA responded. “If our officers discover a replica item during screening and believes it's real, the item will be treated as such until advised otherwise by law enforcement.”

Selling for almost $8 each, the bottles are one of the cheapest souvenirs available at Galaxy's Edge and have been popular: Disney has limited guests to three bottles per transaction to prevent hoarding.

Although with the TSA's new policy, struggling to keep them in stock may no longer be a problem.

Ironically, earlier this year, Scott Trowbridge, the lead Imagineer on the Galaxy's Edge project, said the design of the bottle looked "cool, kind of thermal detonator-ish."

Naturally, the Internet found ways to mock the TSA for its ban of the Star Wars paraphernalia.

One user, @Hopfot, tweeted, "Can I travel with this packet of replica santa grenades in December?" accompanied by a photo of green Christmas tree ornaments.