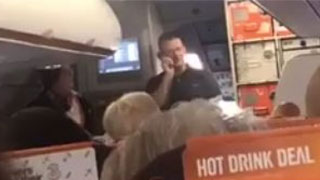 A British traveller, frustrated when the pilot didn’t show up for his Spain-bound easyJet flight, ended up taking the controls himself.

Well, that sounds completely nuts. But it’s not quite as weird as it seems. Passenger Michael Bradley, who was travelling with his family on vacation, was perfectly qualified for the task because he flies for the airline.

After easyJet announced to passengers Sunday at Manchester Airport that the flight was “one captain down,” Bradley volunteered to step into the cockpit and help fly the plane to Alicante, the report said.

He said he was legally permitted to fly because he had the previous four days off and brought his license with him.

“I phoned up easyJet and said, ‘Hiya, I’m standing in the terminal doing nothing. I have got my license with me,'” Bradley told the outlet. “Thirty-eight seconds later they phoned me back and said, ‘Please, please, pretty please with a big cherry on top, can you fly the airplane to Alicante?'”

Before the flight took off, Bradley made an announcement to his family seated in the back of the plane.

“My wife who’s on row 15 with my little boy. Hopefully, he’s asleep by now, I should keep it down or else I’ll get told off,” he said.

A spokesman for easyJet applauded the off-duty pilot for stepping in to fly the plane.

“We are grateful to one of our pilots who was travelling on holiday from Manchester to Alicante on 2SEPT with his family and volunteered to operate the flight,” the spokesman told the outlet. “This meant customers could get to their destination and shows the commitment and dedication of our crew.”