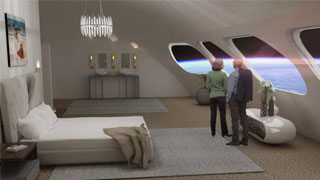 It has been almost 60 years since Yuri Gagarin became the first human to fly in space. All these years later, the cosmos remain an intriguing and befuddling expanse for many.

But another company has joined the ranks of space tourism projects like Virgin Galactic and Elon Musk's SpaceX. California-based The Gateway Foundation has released plans for the Von Braun Station, a rotating space station offering extraterrestrial accommodation.

It's aiming to get the hotel off the ground (literally) by 2025 and make it fully operational for travel by 2027. The Von Braun Station will sleep 352 people with a maximum capacity of 450.

Using existing technology from the International Space Station, the hotel is geared toward guests who want to experience life in space, but in the luxury and comfort of a hotel.

The company released digitally rendered video and images that show a station resembling a rotating wheel, comprised of 24 modules, orbiting the Earth.

Tim Alatorre, senior design architect at the Gateway Foundation, says the rotating wheel would create a simulated gravity. He says the hotel's interior was a direct response to the Stanley Kubrick movie "2001: A Space Odyssey."

Along with standard amenities that can be found on cruise ships such as restaurants, bars, concerts, movie screenings and educational seminars, the hotel will feature a range of more unique activities on board like low-gravity basketball, low-gravity trampolining and rock climbing.

While only the wealthy will be able to afford space travel at first, the company says the eventual goal is to make the experience open to everyone, equivalent to "a trip on a cruise or a trip to Disneyland."

The Von Braun Station is not the only space hotel design in the works. Earlier in 2019, US-based space tech startup Orion Span released plans for a luxury space hotel called Aurora Station, which it hopes to launch in 2022.