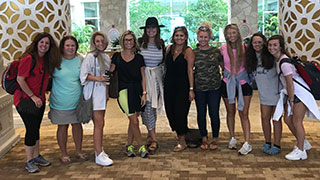 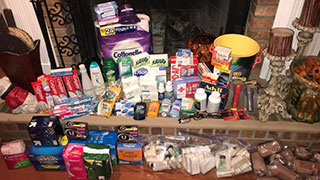 Rikki Kahley arrived at ATL with nine women and 40 suitcases in tow. They were leaving for her bachelorette weekend in the Bahamas.

But their bags weren't filled with outfits for a night out or swimwear for the beach. Instead, they were filled with donations for the people of the Bahamas impacted by Hurricane Dorian.

In advance of her October wedding, Kahley, 24, planned a bachelorette trip to Nassau. But when the hurricane hit, she wasn't sure she and her friends would be able to make the trip.

But the party was set for Baha Mar, and Nassau was spared in Dorian's path, so they decided to still go. But the purpose of the trip had shifted into a relief mission.

Kahley said that it was her younger sister Chloe, 17, who suggested they make an effort to help.

"The main reason I wanted to take supplies down was because I have everything I need plus more," Chloe Kahley told USA TODAY in a statement. "The Bahamians had nothing after the hurricane hit.”

Rikki Kahley said the Baha Mar resort helped make sure the women would be able to get their donations into the right hands. "They were so shocked that we were even doing that," Kahley said.

"We started a Facebook post that we had decided to go ahead and go on the trip but wanted to turn it into somewhat of a mission trip," the mom of four told USA TODAY.

It took them three nights to pack all the supplies. Delta agreed to carry the extra luggage on board for free. Baha Mar already had a foundation set up to help the neighbouring islands, so the group donated the supplies through the resort. It also provided shuttles once the group arrived and then distributed the supplies on their behalf.

Afterward, the Macon, Georgia, native said she was able to carry out the remainder of the bachelorette weekend according to plan.

"Our trip was really fun, and I know our supplies went to the right people, and so it was great," she said. "We were excited to be able to lend a hand."