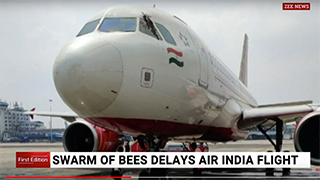 A swarm of bees forced the delay of an Air India flight by nearly two hours at Kolkata Airport.


The large swarm clung to part of the cockpit windshield, impairing the pilots' vision, which led to the plane staying put on the tarmac.The windscreen wipers were deployed and ground staff attempted to get rid of them but nothing worked to get them to buzz off. When they swarm, they really swarm.The airport fire brigade came to the rescue, spraying the bees with a water cannon which finally did the trick.The Agartala-bound plane was carrying 136 passengers.The bee removal operation took about an hour, adding to an earlier delay of one hour due to a technical issue.