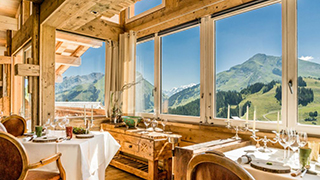 Some people want it all, or nothing at all.

That's the reprisal one acclaimed chef is taking after losing one Michelin star at his restaurant in the Alps, La Maison des Bois.

French Chef Marc Veyrat, known for his black chapeau, tinted round spectacles and epicurean molecular gastronomy, is taking the Michelin Guide to court to find out why La Maison des Bois lost its third star this year.

A court date is set for 27NOV.

Veyrat has even stated that he no longer wants to be in the Michelin Guide at all — the bible of gastronomy — but claimed they won't even accept that.

He claims the Michelin Guide gave him no warning that they would be removing a star or why they might do so.

When the 69-year-old chef lost his third star this year, he says he was devastated.

"I was dishonoured. My team, I saw them cry," he said, adding that he fell into a depression.

Veyrat's lawyer says the chef wants to see bills from inspectors, notes from their meetings, their methodology and criteria for determining why he lost a star.

"We understand the disappointment of Mr. Veyrat whose talent no one contests," Michelin said in a statement. But it added that it "regrets his unreasonable perseverance in accusing and loudly communicating. We will study his demands with attention and calmly respond."