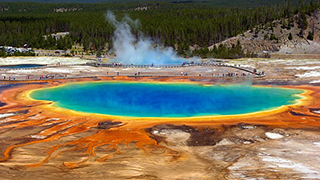 Yellowstone National Park sits atop a geologically active supervolcano, and magma sometimes bubbles close to the surface. So those pools are hot – really hot.

A visitor to Yellowstone National Park ended up with severe burns and in critical condition, according to a hospital spokesperson, after he tripped and fell into one of the thermal pools at Old Faithful geyser at night.

Park rangers investigated the thermal area the next morning and discovered a man’s shoe, a hat and a beer can near the geyser. They also said that there were footprints going to and from the geyser as well as blood on the boardwalk.

The tourist told park rangers he had strayed off the boardwalk while walking without a flashlight at night, then tripped over and fell into one of the thermal pools near the Old Faithful geyser, where water temperatures can reach 100 degrees Celsius.

Despite his injuries, the 48-year-old American man managed to get himself back to his hotel, where he called for help and was taken to the Burn Center at Eastern Idaho Regional Medical Center to be treated.

To pour salt on the wound, he may now also face criminal charges since the geyser is in a protected area – and the National Parks Service (NPS) said that they had “detected evidence of alcohol use." Walking off the boardwalks by Old Faithful is illegal, punishable by up to six months in prison and a $5,000 fine.

The NPS are investigating any damage to the geyser.

“The ground in hydrothermal areas is fragile and thin, and there is scalding water just below the surface. Visitors must always remain on boardwalks and exercise extreme caution around thermal features," said the NPS.

The results of the investigation will be sent to the US Attorney’s Office, where they will decide whether or not to prosecute.