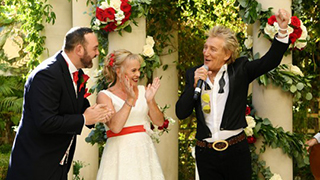 A couple’s big day in Las Vegas was almost ruined when Thomas Cook went into liquidation a week before they were due to tie the knot.

Sharon Cook and Andrew Aitchison, from Liverpool, spent a year planning the wedding of their dreams at Caesars Palace. But they almost called the ceremony off after Thomas Cook dramatically collapsed on 23SEPT.

But the wedding was saved thanks to the combined efforts of Caesars Palace, Delta Air Lines and … Sir Rod Stewart.

The couple was devastated after Thomas Cook offered no refunds, so they called the hotel for help, reports 3 News Las Vegas.

Caesars asked Delta for a favour and it agreed to fly the lovebirds along with 14 friends and family members from Heathrow on Sunday, just three days before the ceremony.

And to make up for their gut-wrenching ordeal, Caesars also arranged Sir Rod’s surprise performance. Andrew said: “On Monday, we lost everything for our dream wedding in Vegas. Then Wednesday morning Delta called to say they would help us. They brought our dream back. It’s just been incredible.”

The 74-year-old rock legend sang to the happy couple as they said ‘I do’ yesterday and even gave all the wedding guests tickets for his show.