The World's Smelliest Fruit Caused A Rouge Flight To Turn Back 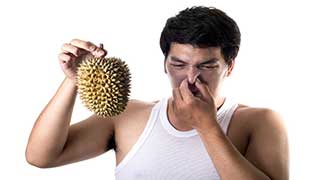 If you've smelled a durian even once, you probably remember it. Even with the husk intact, the notorious Asian fruit has such a potent stench that it's banned on Singapore Rapid Mass Transit.

Food writer Richard Sterling colourfully wrote: "its odor is best described as...pig shit, turpentine and onions, garnished with a gym sock. It can be smelled from yards away."

Is it really that bad? Well, the smell of durian permeating the cabin of an Air Canada Rouge Boeing 767-300ER forced the crew to make an emergency landing on the Montreal-Vancouver route on 17SEPT.

After takeoff, as the aircraft climbed to 7,000 ft the crew detected a "strong odour," according to Canada's Transport Safety Board.

Flight crew requested to level off at 25,000 ft to investigate and troubleshoot the odour, which pervaded the entire cabin, but to no avail.

They then made a PAN-PAN call – the international standard urgency signal -- donned oxygen masks, and turned the aircraft around to return to Montreal. The cause of the "strong odour" turned out to be a shipment of durians in the forward cargo compartment.