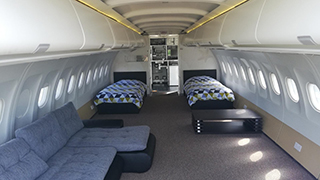 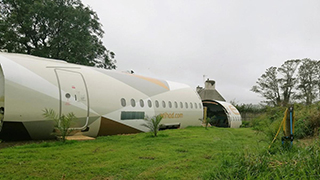 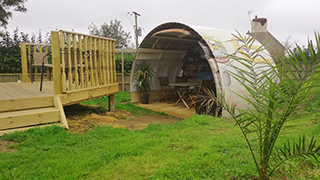 You may have flown on this plane when it was part of the Air Canada fleet 20 years ago. Now you can sleep in its fuselage at a campground in North Wales. That’s recycling at its finest!

The Airbus A319 aircraft was later leased to Air Malta, and ended its life as part of the Etihad fleet. After it reached the end of its flying life, it was exiled to a junkyard. For many old planes, the story would end there. But this time the old bird was purchased by a company called Apple Campings, and now offers up to four guests an “Arabian Nights Airbus” experience.

Camp operator Toby Rhys-Davies bought the airbus from a junkyard in Cardiff, Wales, for about $75,000 and spent some time transforming the plane into a holiday home fit for four people.

The seats were taken out and replaced with beds, chairs a couch and hot showers. Other amenities include a kitchen, overhead luggage compartments – which guests won’t have to fight over -- windows and emergency exits. Another chunk of the fuselage was turned into a BBQ area with a wooden decking added outside. The Etihad livery remains.

The A319 remnant now forms part of a bizarre collection of alternative accommodation at Rhys-Davies’ nine-unit Apple Campsite in Pembrokeshire, Wales, that also includes another plane – a Lockheed JetStar – along with a Pac-Man dome and fake UFO.

Rhys-Davies established the campground five years ago after a long career in retail and has since pumped close a million dollar of his own money into the business.

His purchase of the 1970s-era JetStar in 2016 made headlines around the world. “It wasn’t a plan, or a sensible plan. But it turned out to be a sensible plan,” he said about the decision to build the site. “But I’ll be making money by the end of next year. This Etihad jet will pay for itself in three years.”