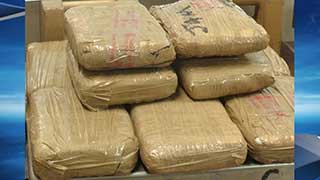 A family visiting South Carolina fished something a little more exciting than a message in a bottle out of the Atlantic ocean: a package that ended up containing about 20 kilograms of cocaine. That's a value of almost $800,000.

The County sheriff said the family, who is remaining anonymous to protect their safety, was walking along Fripp Island when they spotted the trash bag-wrapped package floating in the water. They dragged it onto the beach and lugged it to their rental in a golf cart, later slicing it open to discover bricks of white powder.

That's when alarm bells went off, and they contacted the authorities.

Officials are now working to determine its origin.

The sheriff said narcotics don't frequently wash up in the county, and suspects that Hurricane Dorian may have pushed it ashore.

"It's infrequent. Obviously during the '70 to '80s international drug trade was a lot more prevalent," said Maj. Bob Bromage. "But over the past three decades? Maybe a handful of times."