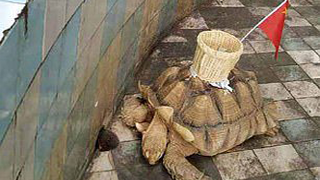 In China, some people believe that tossing coins at a target might just bring them good luck or ward off evil spirits. Most often, the targets are along the lines of a water feature, a statue or bell at a temple.

In an example of a good luck superstition going bad, an older Chinese woman recently delayed a flight after she tossed coins into the plane’s engine for good luck. And that wasn’t the first time that scenario took place, which could easily turn a bid for good luck into a tragedy.

The coin superstition raised its head again recently when the Nanning Zoo glued a basket with a Chinese national flag directly onto a live tortoise’s shell so that visitors can toss their coins into the basket “for luck.”

Located in southern China near the Vietnamese border, Nanning Zoo is known for showing rare animals like dolphins, Asian elephants, and red-shanked douc langurs. It also has the usual zoo animals such as tigers, lions, bears, and hippos.

The zoo now says it is investigating the event, which apparently happened on China’s National Day holiday.

The incident was reported by a user of Weibo – a Chinese version of Twitter. The Weibo post said the zoo was using the tortoise to “swindle” cash from tourists. The post went on to say that the National Forestry Bureau and state media should investigate.