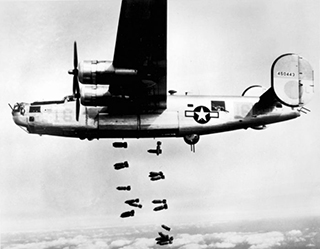 Hamburg Airport suspended all flights for almost three hours yesterday after an undetonated World War II-era bomb was found in the nearby town of Niendorf -- nearly 75 years after the war ended.

"Due to a finding of a WW2 bomb in Hamburg-Schnelsen the airport is currently closed. No flights are departing or landing. The expected duration is still undetermined. All travellers should stay in contact with their booked airlines," the airport tweeted yesterday.

Aircraft already in the air were forced to divert to other airports.

In a follow-up tweet yesterday evening, the airport announced that the bomb was successfully defused and operations were resuming to normal.

In a June 2019 interview with citylab.com, Jens Wehner, a historian at the Dresden military museum, said approximately 1.3 million bombs were dropped on Germany during World War II. Of these, it is estimated that around 10% did not detonate when they were dropped.

This also isn't the first time that a WWII-era bomb has threatened Hamburg. Last May, a 1,000-pound American-made bomb was found in the city and forced the evacuation of 6,000 people in the Heimfeld neighbourhood.