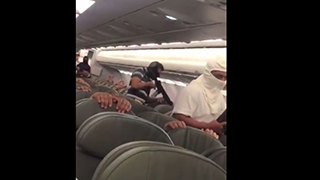 Mexican airline Interjet is under fire after footage of a staged hijacking has gone viral with more than 34,000 retweets.

The video shows masked men with firearms circulating on a plane and occasionally yelling at passengers, who have their hands up on the seats in front of them. Two flight crew are shown sitting in the galley, talking quietly.

In the clip, one of the kidnappers yells "there is no time, we will start killing passengers," according to the Mirror.

The Twitter user who posted the video captioned it with, "A plane got hijacked with passengers in Mexico hope everyone is safe."

Although some people recognized the footage for what it was, some angry Twitter users questioned why the video made its way onto social media in the first place without a detailed explanation.

Interjet has released a statement explaining that the videos were actually a simulation and reassured the worried public that the footage, which has gone viral, was staged to train staff on dealing with possible terror threats. It also clarified the drill was held at Ciudad del Carmen International Airport - not in the air.

"Authorities of the three levels of government are coordinated to implement protocols to rescue passengers," they said. "Therefore, the videos circulating on social networks and where a plane Interjet observed were recorded during the drill."