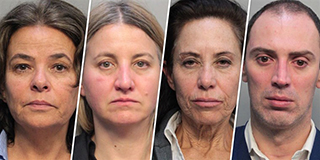 The airline says it's working with law enforcement on their investigation.

The flight attendants were going through a routine customs check Monday during the time of their arrest, according to a Miami-Dade police report.

One Customs and Border Patrol Agent was checking Carlos Alberto Munoz-Moyano, who had arrived on an incoming flight from Chile. The agent asked him how much money he was carrying, and Munoz-Moyano said he had $100, the police report said.

He later changed his statement and said he had $9,000. The agent alerted other agents, who found other attendants from the same fight carrying large amounts of money, the report said; none had a license to transport the cash.

The four defendants were charged with money laundering by evading reporting requirements and being unauthorized money transmitters. The total amount of money seized was $22,671.

Agents found $7,300 on flight attendant Miaria Delpilar Roman-Strick and $6,371 on Maria Isabel Wilson-Ossandon, the report said. Police didn't allege whether the fourth flight attendant charged, Maria Beatriz Pasten-Cuzmar, had any money on her, and it's unclear what role they believed she played.