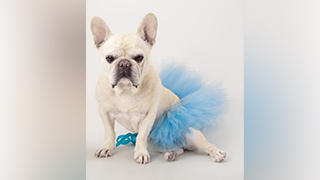 A Norwegian Air flight to Texas was delayed at Gatwick Airport when two French Bulldogs in tutus became visibly agitated.

The emotional support dogs (who themselves required emotional support) were travelling in a passengers' hand luggage on the flight when they began exhibiting signs of stress. The Boeing 787 was delayed by an hour and a half before the Captain decided to offload them and their owners.

"Flight DI7181 from Gatwick to Austin had not yet departed when the captain took the decision to offload emotional support dogs and their two owners at the gate due to the dogs showing signs of distress in the cabin," a Norwegian Air spokesman said.

Other airlines don't allow bulldogs and many other snub-nose breeds from flying as their smaller noses and elongated soft palates on the roofs of their mouths can cause breathing problems in stressful situations like air travel.

Still, we wonder: were they distressed because they couldn't breathe, or because they were forced into tutus?