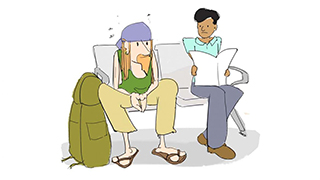 On 15OCT, two Appalachian Trail hikers were escorted off a Frontier Airlines flight at Boston’s Logan airport. The duo (who, not surprisingly asked not to be named) had completed their northbound hike (3,500 km!) and said they stopped to shower and change into clean clothes before arriving at the airport.

However, that apparently wasn’t enough to get the stink out after weeks of hiking. Shortly after boarding, they were approached by crew members, who said they would not be allowed to fly because at least one of them had what was deemed to be offensive body odour. The hikers were walked off the plane, provided with travel-size toiletry bags (ouch!), and told they could try to fly again the next day.

Back in the terminal, the hikers posted a tongue-in-cheek photo on a Facebook page for hikers. “First taste of the real world,” they wrote. “Now we’re in Boston with no way to get home.”

This elicited all kinds of responses from fellow backpackers, ranging from outrage (“Total bullshit! They should have let you fly!”) to empathy for the other passengers (“I wouldn’t even let my husband ride home in my car after he finished his hike!”).

And it included, perhaps not surprisingly, all kinds of advice, ranging from the obvious (“Did you try deodorant?”) to the downright dangerous (“Douse yourself in Febreze and rub hand sanitizer in your armpits!”).

Outside Magazine contacted both hikers, along with Frontier. The two backpackers and the airline both said there had been some extenuating circumstances that hadn’t been made clear in the viral Facebook post -- namely, that the hikers were flying on buddy passes (standby tickets provided to airline employees), because one of the hiker’s relatives works for the company.

A Frontier spokesperson explained that passengers flying on these nonrevenue-generating tickets are held to a higher standard for personal hygiene. But, like most airlines, Frontier also has a general policy concerning such matters.

“At Frontier Airlines we love the outdoors and welcome adventurers onboard our flights every day,” Zach Kramer, manager of corporate communications, said in an email. “The comfort of our customers while onboard is always top of mind and our team will work with passengers to ensure everyone has an enjoyable flying experience on Frontier, including addressing any hygiene-related concerns that may affect fellow flyers.”

Eventually, the two hikers contacted a friend in Boston, who drove them to a thrift store to buy new clothes and let them take another shower at her house. They managed to fly home the next day.