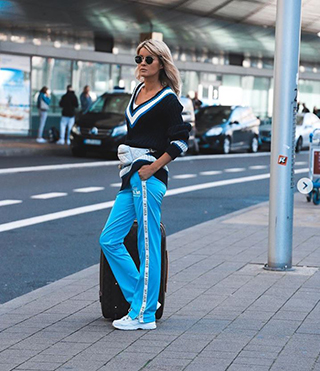 Since 1971, KLM flight attendants have been instantly recognizable in the airline's signature powder blue brand colour, which also extends to its fuselage and logo.

And now KLM's passengers and biggest fans can also show their love for the airline with branded jogging pants in that breezy, beautiful shade of blue.

The Amsterdam-based flag carrier has released a pair of tracksuit bottoms created by its new in-house fashion label. Only 5,000 of the limited edition bottoms were made so act fast if you want a pair (they retail for about $50).

Made from recycled polyester and elastane, the pants have been produced in collaboration with Dutch fashion stylist Fred van Leer.

According to KLM, the idea for the pants came from a study it commissioned that revealed over half of respondents from the Netherlands, Germany, UK and Norway put comfort first when they travel. So KLM decided it was high time to make comfortable travel wear that was also fashionable.

It's not the first time the airline has mixed high flying with high fashion – several years ago, it launched a range of gaudy Christmas jumpers – and of course, they were made in KLM’s signature shade of blue.

Other ventures into the fashion world by well-known airlines include Lufthansa's branded sneakers in collaboration with Adidas, and Hawaiian Airlines' branding deal with Uniqlo to have its logo emblazoned across a range of t-shirts.