Extreme Halloween: $20K Reward To Anyone Who Completes Haunted Tour 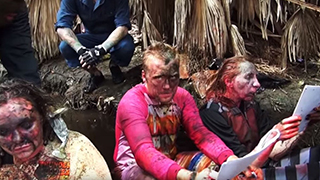 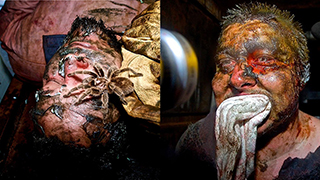 A haunted tour experience that spans two states and lasts up to 10 hours requires participants to clear a background check, pass a doctor's physical and mental exams, and sign a 40-page waiver.

We’ll be leaving now, but you may enter if you dare.

The McKamey Manor experience, which stretches from Summertown, Tennessee, to Huntsville, Alabama, also requires "contestants," as the operators dub them, be at least 21 (or 18 with parental permission), insured and pass a drug test.

How terrifying is it? Let’s put it this way: owner Russ McKamey offers $20,000 to anyone who completes the tour, but says no one ever has.

He records each physically demanding and psychologically disturbing tour on video – for his own protection he toldWFLA-TV – and then posts them online, showing the participants quitting in humiliation.

"You get a lot of people who think it's going to be easy money," Kris Smith, a 37-year-old Michigan native who works as a volunteer remotely for McKamey's tours, told USA TODAY.

Smith was first introduced to the operation years ago as a contestant. During his first go-around, he didn't make it past signing the waiver, which details all the physically painful, high-stakes and grotesque things that could happen along the way.

"I read it and I quit," Smith said. "I got to the last page and turned around and went home.... There's so much. You have to pull out your own teeth, there's a chance of getting a tattoo, a chance of your fingernails getting pulled out. It's really overwhelming. There's a chance of death. Accidents do happen."

Smith later returned and tried two more times to complete the tour before becoming an official member of McKamey's team. Once he tapped out after getting buried alive in a wooden coffin and then again during a round of hypnosis that gave him a "complete panic attack."

At Open Jaw, we’re here for the treats, not the tricks. Our idea of terror is a middle seat on a charter flight. We’ll sit this one out.