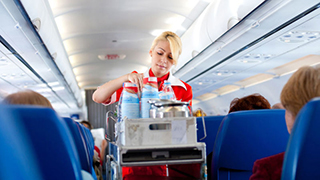 Water on some U.S. airlines is so bad you shouldn’t even wash your hands with it.

That’s the unpleasant takeaway from a new study that revealed both bathroom and drinking water on U.S. carriers may be hazardous to passenger health.

The 2019 Airline Water Study researchers investigated 11 major airlines and 12 regional airlines based in the U.S.

For the study, each airline was given a “Water Health Score” consisting of 10 criteria, including presence of E. coli and coliform microbes.

Alaska Airlines and Allegiant Air offered the least awful water among U.S. major carriers. JetBlue and Spirit Airlines were the worst, each scoring one out of five.

Piedmont Airlines was the highest-rated regional carrier with a score of 4.33 out of 5.

The Hunter College NYC Food Policy Center, which conducted the study, suggests passengers should never drink water served on a plane unless it is bottled and sealed. That includes coffee or tea served in-flight.

The Center also discourages passengers from washing their hands in the bathroom, instead recommending you bring your own hand sanitizer.

The study claims, “an aircraft flies to numerous destinations and may pump drinking water into its tanks from various sources at domestic and international locations.

“The water quality onboard also depends on the safety of the equipment used to transfer the water, such as water cabinets, trucks, carts and hoses.”