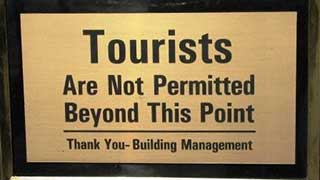 There was a time when tourism meant an influx of welcome foreign cash. For many destinations, it now means an influx of drunken behaviour, overcrowding, begging and a general nuisance.

With global tourism hitting record figures -- 1.4 billion tourist arrivals in 2018, according to the UNWTO-- destinations are taking measures to protect their cities from being overrun by loud, and worse, cheap, hordes.

Here are some of the most offensive types of tourists being asked to stay home.

Stag parties tend to top the list of unwanted tourists.

Matt Mavir, founder of a UK-based tour operator exclusively working with bachelor & bachelorette parties, says it sometimes takes a bit of persuading for hotels to accommodate his clients.

"All of a sudden, hoteliers with rooms you'd have picked up for next to nothing are thinking, 'Would I rather have couples and people who are definitely not going to cause any problems, or a group of 12 lads who'll probably be fine but might not be?'

Every destination wants to maximize its income from tourism -- but while many places encourage luxury travellers, others are going all out to discourage backpackers and those on a lower budget.

Australia, for example, long known as a destination for young travellers, introduced a controversial "backpacker tax" in 2017 and Qatar's official tourism strategy has pushed for "well-off families" and "high-income travellers" that will do more than just lie on a beach and count their pennies.

And then there's those that take frugality to the extreme, their actions earning the term "begpacking" -- those who busk or ask for money in the street to fund their travels.

In JUL 2019, Bali -- one of the destinations where the phenomenon is most pronounced -- announced plans to report Western begpackers to their embassies so that their national authorities can foot the bill for their upkeep.

Cruising For A Bruising

All around the world, cruise ships are being blamed for overtourism, as ships disgorge thousands of passengers every day. The famously bijou ports of Europe are particularly badly hit.

Venice has a name for the tourists that do the most damage: "mordi-fuggi", or "hit and run" – those that beeline solely to the main landmarks, leading to overcrowding on the city's main axis. And since they don't stay overnight, they don't pay the tourist tax that helps clean and maintain the city, or spend time and money at local businesses.

Some destinations are taking a stand against large groups.

Amsterdam introduced legislation to ban groups of over 15 people in the centre from 2020, as did Barcelona, banning groups of 15 or more from the famous La Boqueria food market at peak times in 2015 after locals complained of being disturbed while grocery shopping.