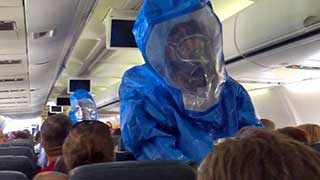 Travellers flying with Ryanair, Europe's largest budget airline, may need to do so wearing a "biohazard suit."

That's the advice offered by Rory Boland, editor of British travel magazine Which? The publication surveyed almost 8,000 people online this fall to find the dirtiest airlines and the Irish budget carrier came out on top... or bottom.

To suss out the situation first-hand, a Which? investigator boarded a Ryanair flight and said they found "greasy tray tables, soiled headrests and dusty window sills." When they used an ultraviolet light to assess how clean the tray tables were, it showed up stains that couldn't be seen by the naked eye, Which? said.

"Faster and faster turnarounds are one thing but it is unacceptable for some airlines to be cutting corners when it comes to cleaning out their cabins properly – no matter how cheap the airline ticket," said Boland. "There are steps you can take; either choose your next flight on an airline that has a good track record for cleanliness or equip yourself with some antibacterial wipes."

Overall, eight in 10 pax rated cleanliness positively across a total of 42 airlines, both budget and full-service.

Only six in 10 passengers onboard budget airline Wizz Air found the planes to be clean, while 63% of those flying on Spanish carriers Vueling or Iberia felt the level of cleanliness to be good. Across Wizz Air and Vueling, one in 10 people rated the cabin cleanliness as "poor".

At the other end of the spectrum, easyJet and British Airways both ranked as having good levels of hygiene onboard. This went up further for passengers of Air New Zealand, Singapore Airlines, Emirates, Qatar Airways, Cathay Pacific and Swiss, which each scored in the mid-to-high 90%.

When all is said and done, Ryanair may been named the dirtiest flight operator in the UK, but at the end of they day, they're still the cheapest... even after buying antibacterial wipes (but not the hazmat suit).