An Instagrammer Showed Everyone What Not to Do When Visiting Auschwitz 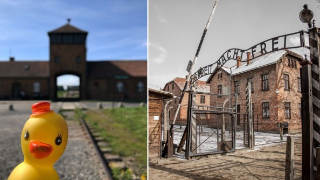 Some people just don’t get it.

An Instagram influencer has apologized to officials at the Auschwitz Memorial in Oswiecim, Poland after posting a photo of a rubber duck on social media in front of the former concentration camp’s "Gate of Death.”

The unidentified travel blogger, who goes by the name of @Atuk.Apil on social media, has a modest but not insignificant following on social media. He or she uses a rubber duck toy to pose in front of famous landmarks including Buckingham Palace, The Treasury in Petra, and more.

The shots are typically innocuous, however, the blogger’s recent post in front of Auschwitz quickly caught the attention of horrified followers and officials.

“What if someone who travels with a rubber duck and uses it as an artistic Instagram convention arrives at [the] Auschwitz Museum,” museum officials tweeted alongside the photo of the duck. “Is the rubber duck in front of the Gate of Death disrespectful - even unintentionally? Or is it a side effect of the visual world we should accept/ignore?”

From our perspective, the Museum is being generous, especially by describing rubber duck photos as “an artistic Instagram convention.”

Museum officials additionally noted that after reading the caption of the now-deleted post it was clear the person understood the significance of the historical site.

The caption partially read, “It was the largest extermination centre in the history of Nazism, where it is estimated that about 1,300,000 people were sent, of which 1,100,000 died, the vast majority of them Jewish.”

Officials asked on Twitter, “Does it [make] things better? Or maybe worse” that the person understood where they were but posted an image like this anyway.

Just one day after initially posting about the photo the museum received a formal apology from the blogger, who explained it was not their intention to "disrespect or generate controversy." The person added, "my sincerest apologies to @auschwitzmemorial for the inconvenience and to all the people who have felt offended."

As Stacey Leasca writes for Travel + Leisure, visiting Auschwitz, and historical sites like it, are a vital part of our travelling education. However, when visiting there are a few things to remember to ensure you remain a respectful and conscientious tourist.

At Auschwitz, the museum encourages visitors to “...behave with due solemnity and respect." That means leaving your Instagram poses — and selfies — at home.