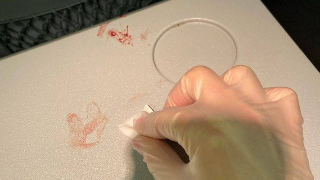 An Edmonton woman is calling on Flair Airlines to review its policies after she was left to clean up blood on a flight late last week.

On Friday, Jessica was flying with her husband from Edmonton to Vancouver when she sat down and noticed blood on the front of her seat and on her tray table. Global News reported on the story but did not  publish Jessica’s last name.

Jessica said she called over one of the flight attendants and asked for it to be cleaned up. But that didn’t happen.

“She comes back with a pair of rubber gloves and some Wetnaps and a garbage bag and hands it to my husband to hold while I clean it,” she said. “The girl beside me was like, ‘That’s so disgusting.'”

About 10 to 15 minutes after takeoff, Jessica said another flight attendant came to her seat to offer her more wet wipes, after hearing about the blood. Jessica said she declined as she had already wiped up the mess.

Jessica said she took a picture of the blood on the tray table and posted it to her personal Facebook page. After thinking more about the situation and talking it over with some friends, she said she posted the picture publicly on Twitter in hopes of getting the company’s attention.

“The more I thought about it, I was like, ‘That’s actually really gross.’ I come from customer service and the service industry background so just thinking about how unclean that is to do and how you shouldn’t be getting a customer to be cleaning that up.”

Jessica spent the weekend in Vancouver and flew home on Monday morning. She said during her flight back to Edmonton, an announcement was made over the plane’s intercom, asking her to meet a customer service agent at the gate upon arrival.

“She just asked about the situation again. I think she was kind of hoping that maybe it was my blood and maybe I had offered to clean it up and that’s why they brought me those things. But that wasn’t the case,” Jessica said Monday.

Jessica said the agent was very understanding of the incident and apologized that it happened. Jessica wanted to ensure the flight attendants were not held responsible for what happened, but that the company itself takes a closer look at its policies.

“I told her I didn’t share it to get anything out of it. I just think it’s important to hold companies accountable to these kinds of things. It was a good conversation and she was really lovely and attentive and it sounds like they were going through the processes to understand what went wrong and how to change it going forward.”

In a statement to Global News, Flair Airlines said the safety of its passengers is its highest priority.

“We apologize for the unfortunate incident experienced by one of our passengers aboard a Flair Airlines flight earlier today due to an oversight during our typical sanitation procedures and a miscommunication between flight attendants,” the statement read.