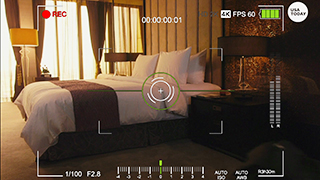 When 27-year-old Tetsuya Inoue took over his grandmother's hotel, Asahi Ryokan, in Fukuoka, Japan, he wondered how he could improve business in the new economy.

He got the idea after a British YouTuber livestreamed much of his stay at the ryokan, and subsequently opened up room #8 (which used to be the least popular room at the property) to operate under this new business model.

Inoue explains to CNN Travel that the feed is video-only, so guests will have privacy in their conversations or phone calls. Guests are permitted to turn the lights off, and the bathroom area is out of camera range.

"This is a very old ryokan and I was looking into a new business model," Inoue says. "Our hotel is on the cheaper side, so we need some added value, something special that everyone will talk about."

Now, many young guests who are looking to save money while travelling in Japan have been open to the $1 hotel room concept.

"Young people nowadays don't care much about the privacy," Inoue says. "Some of them say it's OK to be [watched] for just one day."

While $1 a night isn't enough to line any hotelier's pockets, Inoue is thinking beyond the daily rate. His YouTube channel, One Dollar Hotel, already has more than 2.5 thousand subscribers, and as the numbers grow, he hopes he can begin monetizing the videos.