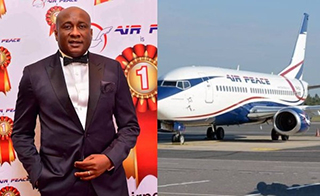 A Nigerian scam? Say it ain’t so.

CNN reports that the founder of a major airline in Nigeria has been charged with bank fraud and money laundering for allegedly moving more than US$20 million from foreign sources through American bank accounts and using it, in part, to pay for living expenses, luxury cars and high-end shopping.

Allen Onyema, 56, the chairman and founder of Air Peace, is accused of moving the money from Nigeria and other sources through U.S. bank accounts in a scheme that involved organizations he founded in his home nation and false documents related to the purchase of airplanes.

"Onyema allegedly leveraged his status as a prominent business leader and airline executive while using falsified documents to commit fraud," US Attorney Byung Pak said in a news release. "We will diligently protect the integrity (of) our banking system from being corrupted by criminals, even when they disguise themselves in a cloak of international business."

Onyema denied the allegations. He says he is "innocent of all charges and the U.S. government will find no dirt on me because I have never conducted business with any illegalities."

"Be rest assured that I also have my lawyers on this and these mere allegations will be refuted," Onyema said. "I never laundered money in my life, neither have I committed bank fraud anywhere in the world. Every Kobo (of Nigerian currency) I transferred to the U.S. for aircraft purchase went through the Central Bank of Nigeria LC regime and all were used for the same purpose.

About a decade ago, Onyema, a Nigerian citizen, started travelling frequently to Atlanta, where he opened personal and business bank accounts, federal prosecutors' statement said.

Between 2010 and 2018, about US$45 million "was allegedly transferred into his Atlanta-based accounts from foreign sources," they said. The sum included several instances of "hundreds of thousands of dollars transferred directly" from accounts for four organizations Onyema founded to promote peace in his home country to a personal bank account he shared with his wife, according to an indictment.

Onyema used money in those accounts during the period to pay for "personal living expenses," including an armoured Lexus LX570, a Rolls Royce and a Mercedes, plus for purchases at Prada, Neiman Marcus, Macy's, Louis Vuitton and Apple stores in Atlanta, the indictment states.