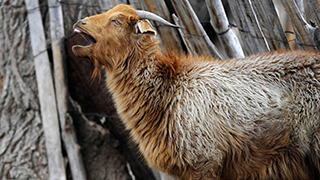 “They’ll never find this,” is the optimistic refrain of drug smugglers who think they can beat the system.

They’re often wrong, as an Alaska man found out when he was arrested last week while allegedly smuggling drugs hidden inside spoiled goat intestines stored in his checked luggage, authorities said.

Investigators arrested Cenen Placencia, 71, at Ted Stevens Anchorage International Airport after finding $530,000 worth of heroin and methamphetamine in the frozen meat, according to a report from the Alaska State Troopers.

Placencia initially allowed authorities to search the 47-pound fish box he had checked for a morning flight to Kodiak. Small pieces of meat with some animal skin were frozen together in a single mass, according to an affidavit, and they did not appear to be packed for human consumption. As the meat thawed, investigators said it smelled rancid.

Authorities eventually pulled out 10 balls of duct tape from one intestine and discovered plastic bags inside, the affidavit said. They seized a total of 740 grams of heroin and 389 grams of methamphetamine after receiving a search warrant.

Placencia told investigators he planned to eat the rotten intestines and did not know the drugs were inside them, according to the affidavit written by an agent with the Coast Guard Investigative Service. He said he packed the goat himself after buying it from a California rancher for $140.