With DL Since 1962, 79-Year-Old Flight Attendant Says She Was Fired Over A Carton Of Milk 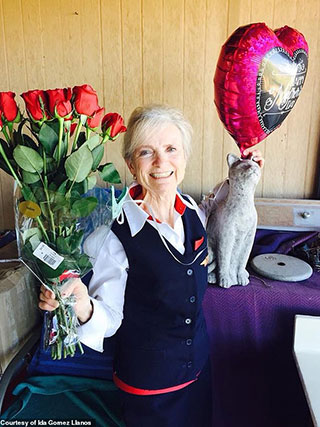 Ida Gomez Llanos on her 50th anniversary
as a DL employee. 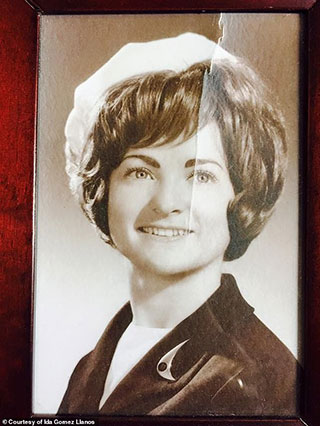 A 79-year-old air flight attendant employed by Delta since 1962 is suing the airline after she was allegedly fired over a missing carton of milk.

In an interview with DailyMailTV, Ida Gomez Llanos claims she was the victim of a smear campaign by colleagues envious of her salary and perks, encouraged by managers who wanted to replace her with cheaper, younger staff.

After receiving annual pay rises over her 57-year career, Llanos was earning around $250,000 when she was fired -- more than four times the average flight attendant salary of $56,000, according to the Bureau of Labor Statistics.

The Huntington Beach-based flight attendant filed her lawsuit against DL this month in a Los Angeles court, claiming she was “harassed,” “bullied” by colleagues – and that instead of protecting her, bosses wrote her up and eventually fired her.

The 79-year-old told DailyMailTV that after 57 years working for the company, which saw her rise to become the number one flight attendant in LA and rank fifth in the country, her bosses dismissed her for taking a carton of milk off a plane after her line manager gave her permission.

“I couldn’t believe it,” Llanos said. ‘I’ve been accused of so many things and none were true.

“I try not to take it personally, but when you get mean about me and start lying, that is a problem.”

According to DailyMailTV, as the most senior flight attendant in LA, Llanos got perks including priority on overtime shifts. She believes her colleagues grew envious, launching a smear campaign to get her fired.

"They accused me of sleeping, of taking chocolates, not doing a good job – but my letters from passengers proved that wrong,” Llanos said. “They accused me of not being able to arm or disarm the doors. But we all go through training every year, and we have to pass that training or we do not fly.”

According to her lawsuit, the 79-year-old was an exemplary employee until she was fired in April this year, receiving company awards and positive reviews from customers.

“I haven’t called in sick for thirty or forty years,” she told DailyMailTV. “Every year they had a banquet for the top 1% who had the most letters from the customers. I went to that three times. I was nominated by the chairman’s club. I’ve had Flight Attendant of the Quarter; you get a little statue.”

But despite a previously spotless record, Llanos claims her bosses wrote up fabricated accusations from jealous colleagues because firing her would save money.

You can read the full story and watch the video here.

debbie - December 5, 2019 @ 10:45
How very sad. Younger staff right . Ida obviously has been the best for many years and proved it. What a sneaky , low down excuse Perhaps the CEOs should be fired!