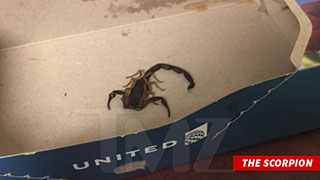 In what could be the sequel to "Snakes on a Plane," a female passenger travelling from SFO to ATL aboard United Airlines was stung multiple times by a scorpion while in-flight.

TMZ reported that the woman said she felt a stinging sensation on her leg, after which she went to the restroom to take a look. That was when she started feeling intense pain and a live scorpion dropped out of her pant leg.

Reportedly, the creepy-crawler, which was very much alive, then scurried across the floor and was later captured by flight attendants.

A spokesperson for UA said flight crew acted fast and consulted with a doctor on the ground. The flight was met with medical personnel upon landing and the passenger was sent to a local hospital for treatment.

"After learning that one of our customers on flight 1554 from San Francisco to Atlanta was stung during flight, our crew responded immediately and consulted with a MedLink physician on the ground who provided medical guidance," said the airline rep.

"We have been in contact with our customer to ensure her wellbeing."

The airline’s statement did not elaborate on her condition.