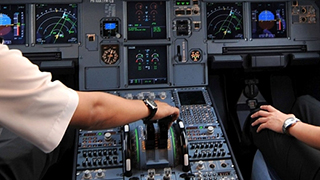 A Delta Air Lines cabin crew member has escaped with a fine and kept her job despite being caught nearly seven times over the legal alcohol limit while on duty.

And that’s just one of this week’s aviation drinking on the job stories.

Flight operations chief Capt. Gurcharan Arora emailed all pilots warning them of more severe penalties if pilots continue to test positive after routine breath tests. Of the four who tested positive, three were commanders and one was a co-pilot.

In the first incident, Lemara Thompson of Brooklyn, says she made a 'horrible mistake' while on a stopover in London. The 27-year old flight attendant admitted being over the legal limit while on duty at London Heathrow Airport.

"Officers were called to a control post at Heathrow Airport to reports that the defendant had passed through a security arch smelling of alcohol," said prosecutor Shann Sethi.

"The defendant made, in her own words, a horrible mistake -- she jeopardized everything she had worked so hard to achieve in life. She is extremely remorseful," said defending counsel Dan Martin.

Martin said Thompson had undergone disciplinary proceedings with Delta but had managed to keep her job.

She also managed to avoid a prison sentence but was fined £548 plus £85 in court costs.

In India, under the Directorate General of Civil Aviation's rules, a pilot who fails the test gets a mandatory three-month suspension. A second offence could result in grounding for three years and a further offence leads to the pilot license being revoked.

The email cited 'more severe' punitive action than this could be handed out if it the pattern continues.

"The fact that there are four events in a span of a week is clearly indicative that some pilots do not understand the gravity or implication of being tested positive for alcohol," the email said.