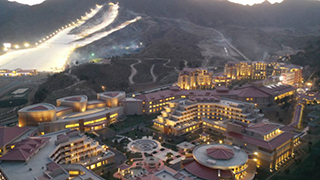 The country might not have the best track record when it comes to things like human rights, democracy and economy, but that didn't stop North Korea's leader Kim Jong Un from grinning ear to ear as he cut the ribbon on his country's new mountain spa and ski resort.

The new Yangdok Hot Spring Cultural Recreation Center, which opened on Saturday, is intended for people to enjoy “high civilization under socialism” as the country uses its tourism exemptions in sanctions to build revenue.

In a televised broadcast, the Supreme Leader was greeted at the site with soldiers and flag-waving citizens and children. After the ceremonial ribbon-cutting, Kim toured the resort facilities, which include hot spring spas, a ski slope and equipment rentals, a horse-riding park and accommodations, all a short train ride from the capital city of Pyongyang.

“(Kim) hardly repressed his happiness, saying that it has become possible to provide people with new culture, and one more plan of the Party to make our people enjoy high civilization under socialism as early as possible has come true,” Pyongyang’s official Korean Central News Agency said.

Kim praised his soldiers for creating a “miracle and perfect edifice” that serves the ruling party’s efforts to guide people to modern civilization, the state media report said.

The Yangdok resort, which North Korea began building last year, has been one of Kim’s major development projects, along with another mountain resort recently completed in the country's north and a summer resort being built on the coast.