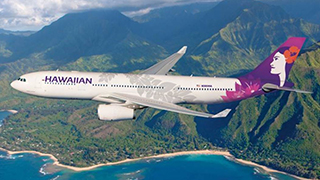 Demonstrations often get condemned for disrupting services, which may cause the fundamental reason for the protest to get dismissed. But Hawaiian Airlines employees are aiming to get passengers – and airline execs -- on the side of their cause using a friendlier approach.

Following a dispute over pay, HA flight crew staged a protest at HNL, but rather than noisy demonstrations and scathing signs, their "Aloha spirit" was on full display as they helped passengers at the curb with their baggage and talked to them about their contract dispute.

The staff members claim they want to show they are still willing to commit to their work despite the ongoing talks over contracts.

“I don’t think that they truly understand the disconnect, the Aloha spirit we bring to work every day,” said flight attendant Jaci-Ann Chung, as reported by Hawaii News Now.

“So even though we’ve been languishing over contract negotiations for three years, we still show up to work and do our job as professionals.”

This same respect was also shown to Hawaiian’s negotiating team, which was presented with traditional lei as a welcome gesture.