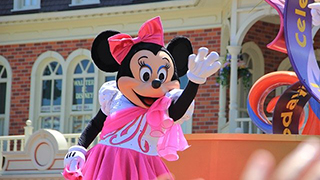 There are multiple reports that Disney fans are taking their affection for the mouse cast too far. Characters from Minnie to Mickey are suffering the ravages of inappropriate touching, patting and groping.

The employees wearing the Minnie Mouse and Donald Duck costumes both claim they were groped by tourists, according to Orange County Sheriff’s Office reports.

The 36-year-old Disney employee who portrays Minnie Mouse posed for pictures with a couple from Minnesota. As Minnie Mouse gave the man a hug, she says he groped her chest three times, according to the sheriff’s incident report.

Minnie ultimately decided against pressing charges, but it wasn’t the first time the man’s name had been raised by Disney World employees. He also had “an inappropriate interaction with a cast member” at the Magic Kingdom earlier in DEC.

A 36-year-old woman inside the Mickey Mouse costume went to the hospital with neck injuries that she says were caused by a park guest patting her costume's heavy head.

While she told deputies she didn’t believe the tourist intentionally tried to hurt her, other reported instances have been much more disturbing.

Disney took some action to ban the man, who is a Disney Vacation Club member, from the theme parks.

And then there was a woman in her 60s who got a little too grabby with Donald Duck. According to the incident report, she began touching the character’s arms, chest, belly and face. When the 18-year-old female employee inside the costume moved away for help, the woman followed, and then “frantically” put her hands inside the character’s costume, touching her chest, the report said.

The incidents come after a 51-year-old man was arrested last month for touching a Disney princess' breast while getting a photo taken.

“Everyone should feel safe at work, and we encourage Cast Members to come forward in any uncomfortable situation,” said Disney spokeswoman Andrea Finger in a statement. “We provide multiple resources to protect our Cast Members’ well-being, including on-site law enforcement officers who respond, and are available to them, if needed.”

Rumours are there may be a Minnie Too movement afoot.