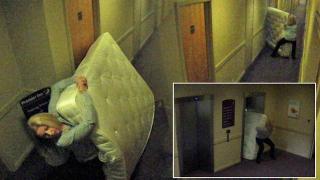 When checking out of a five-star hotel, thrifty travellers have been known to slip a few shower caps, upscale toiletries or even slippers into their suitcases.

But more brazen guests are managing to steal bulkier items -- including mattresses, coffee machines and even a stuffed animal, hotel and spa reviewer Wellness Heaven found in a survey of 1,157 four- and five-star hoteliers.

An astonishing 49 hotels reported that mattresses had been stolen from their premises since January 2018, CEO of Wellness Heaven Tassilo Keilmann told CNN, adding it was likely hotels could have suffered multiple thefts.

"They told me that it usually happens in the night -- when the reception is not open, when there is nobody there. Some of them have security camera footage showing them transporting it to the elevator," Keilmann told CNN.

While towels, bathrobes and coat hangers were the items most frequently pilfered, guests also tried to steal bulkier or more expensive items, including tablet computers and TV sets, the survey of mostly European and Asian proprietors found.

"This was surprising to me, because it is quite easy for the hotel group to determine which person stole it, because the maid will look after checkout, and it's easy to say this guest stole the TV or the mattress," Keilmann added.

Whereas many four-star hotels have taken to tagging their items to trigger alarms when smuggled off the premises, five-star hotels are less likely to confront thieves or to report the theft to police, Keilmann told CNN.

"In a lot of cases, they don't report it to the police, because they don't want to be connected to crime," Keilmann said.

One of the most surprising thefts, Keilmann told CNN, was a stuffed boar's head taken from a hotel in France.

And one guest in an English hotel pocketed the numbers from the door of his room -- something the hotel only discovered when the next occupant couldn't find it.