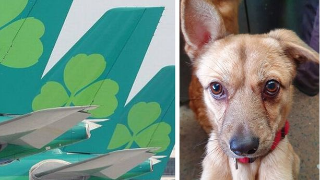 Sometimes the simple ideas are the most brilliant.

Aer Lingus is bringing a little extra cheer into the world by donating its inflight blankets to animal charities in Northern Ireland instead of putting them in landfill.

These blankets, used on transatlantic flights, usually only get washed and reused about three times before they are discarded.

Inspired by his own adoption of a rescue dog, an Aer Lingus pilot had the bright idea of negotiating a deal with the airline whereby they give old blankets to animal rescue charities that can make better use of them, reports Belfast Live.

“Aer Lingus have agreed to donate all blankets that will be disposed of and they’ve agreed they can be used by any animal rescue groups or centres for clean bedding for animals or any use that can be thought of for the animals,” said a spokesperson for Lost and Found Pets North Down.

“And this will be an ongoing supply. We cannot thank everyone involved enough for this amazing gesture.”

The first blankets have been arriving in Northern Ireland for distribution this week.

Priority is being given to the smaller rescue charities which are run by volunteers who “do not get paid for their love and dedication to the furbabies,” according to Lost and Found Pets North Down.

pat - January 3, 2020 @ 10:58
What an incredible idea that cost very little to implement and does so much good. Bravo to this pilot and Aer Lingus.