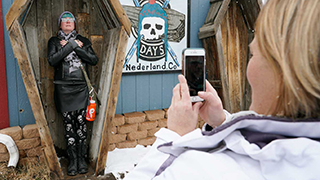 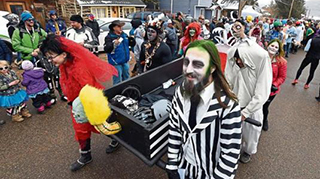 Winter festivals are a great way to get out into the cold and celebrate the season. Canada has its share, with events ranging from ‘polar bear plunges’ into frigid waters to the less heart attack-inducing ice sculpture exhibitions.

What we don’t have is Frozen Dead Guy Days, a festival that has taken place in the mountain town of Nederland, Colorado (just west of Boulder), since 2002. Now in its 19th year, the quirky festival offers some not-so-traditional winter activities — like human foosball, frozen T-shirt contests, and coffin races.

Frozen Dead Guy Days’ started when Bredo Morstoel, a public official from Norway, died in 1989. After his death, his grandson Trygve Bauge had his body sent to a San Francisco-based cryonics lab to be frozen, with the hope that science would one day cure his grandfather’s ailments.

Bauge built a cryonics chamber inside a Tuff Shed at his home in Nederland, Colorado — outfitting it to withstand all kinds of natural and manmade disasters. There, Bauge’s grandfather (and a few other frozen bodies that had been sent to Bauge’s “lab”) remained for a few years.

Unfortunately, in the mid-90s, Bauge was sent back to Norway and the frozen body was left with his mother in Colorado. Bauge now pays a man to deliver between 900 and 1,200 pounds of fresh dry ice every two weeks to cover his grandfather’s sarcophagus — which can still be found in Nederland.

Since Bauge left the country, the story of his grandfather and the failed cryonics facility have become part of local lore. And in 2002, the “Frozen Dead Guy” was suggested as a theme for the town’s winter festival (perhaps jokingly, at first). Yet the theme stuck, and the story has become part of Colorado’s culture.

The “frigidly fun festival” is now one of Colorado’s most anticipated winter events. It usually takes place over the course of three days in March – 13-15 MAR this year. During the festival’s most popular event, the coffin race, costume-clad teams show up with a decorated coffin. Each team must pay an entry fee of $75 and prizes are given out for the best time, best theme, and most notable screw up.

In addition to the coffin race and other events, the festival delivers live music and local food. The weekend starts with the annual Blue Ball, the festival’s opening party.