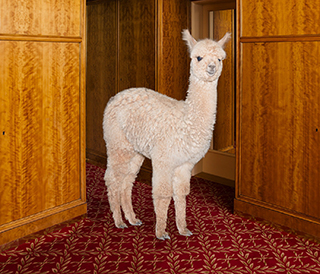 The last time you were at a hotel, maybe you forgot your phone charger. Who hasn’t? But what about a 5-foot unicorn made out of flowers, a pair of alpacas named Ant and Dec and a best man?

Those are all real things people left in Travelodge UK hotels during 2019. Travelodge is a United Kingdom budget hotel brand, where approximately 19 million people stay every year (not to be confused with the Travelodge brand by Wyndham in North America.)

"Interestingly our hotel teams have reported a rise in wedding and proposal props being left behind in our hotels in 2019," said Shakila Ahmed, a Travelodge spokeswoman said. "This included a 5-foot floral unicorn, a huge full moon, a flower wall, palm trees, a Tiffany engagement ring and even a best man."

A Torquay Travelodge hotel manager in England discovered a best man who overslept – and whose wedding party left without him. He did make it to his brother's wedding, though the hotel manager needed to arrange transportation to get him there.

In the case of the alpacas, a guest was staying at a Stratford-upon-Avon location in England when she left them behind. While this story begs for more detail, the Travelodge press release doesn’t answer obvious questions like: What kind of hotel allows alpacas in its rooms?

The alpaca herder wasn't the only pet owner who failed to take her pets with her: a cat show enthusiast at the Stirling Travelodge in Scotland mistakenly thought her husband put their cat, Angel, in the car, only to realize 80 kilometres later that Angel wasn't there.

What else have people left behind?

It's unclear whether items made it back to their owners. Any item unclaimed within three months is donated to Travelodge's charity partner, the local British Heart Foundation Charity Shops.