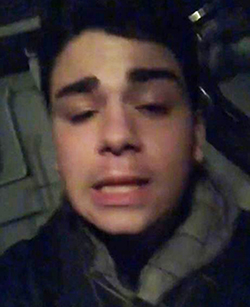 “I am really scared.”

A tourist in Israel was forced to call the police after he was trapped in the luggage hold of a bus.

The unnamed 19-year-old visitor from New Jersey was travelling from Tel Aviv to Jerusalem when, after trying to get his suitcase from underneath the bus, the door closed behind him.

He shared a number of images to his Instagram story, captioned "Police on there (sic) way to intercept the bus."

According to YNet News, he also said: "My heart is pounding fast, but I’m fine. I called the police. In the meantime, I’m here among all the bags and suitcases. It’s really stressful."

He then called the police, telling them: "I am really scared."

The police were eventually able to track down the bus using GPS and, after 20 minutes, the teen was let out.

Police arrested the driver and are investigating the incident. But a spokesperson for the bus line said the 19-year-old was "irresponsible" as he did not alert the driver when he climbed into the luggage hold, and ignored signs which tell passengers to ask for help when retrieving bags.

However, he praised the "resourcefulness and courage" of the tourist.

Yep, he had a phone and he used it.