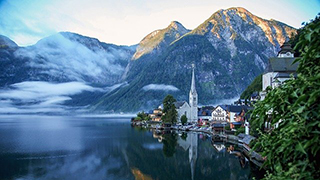 It's not easy being a darling town anymore, especially not when you were what inspired a Disney movie.

The alpine village of Hallstatt, Austria – population around 780 -- is learning that lesson the hard way. It is rumoured to be the inspiration for Arendelle, the fictional town in Disney's highly popular Frozen movies, and has been attracting tends of thousands of tourists.

Some of the town's locals have been struggling to adjust to the fame. There have been reports of Hallstattians feeling driven out by visitors, much like the irritation felt in cities like Venice, Dubrovnik and Amsterdam which also face overtourism.

Now, the village is trying to work out how to deal with the influx of visitors.

Michelle Knoll with Hallstatt's tourism board says there will be a "focus on quality tourism in the future," with the implementation of a new bus system the first step.

She says it will reduce "the number of buses and also the number of guests here in Hallstatt. The buses will book a slot in advance and then they can visit Hallstatt. Buses who have a booking at the town, either an overnight stay, or a ship cruise, a visit in a museum, get preference."

The first "Frozen" movie was released in 2013 but the village has been on the tourism tipping point for some time.

Knoll says things started getting out of hand after 1997, when Hallstatt was added to UNESCO's World Heritage list, which kicked off the start of the tourism influx.

In 2017, The Local Austria reported that the village had to employ "bouncers" at churches to stop eager tourists from disturbing services.

Still, as with any tourist hotspot, the influx of visitors is a double-edged sword, with the hefty tourism dollar making a big impact on the town.