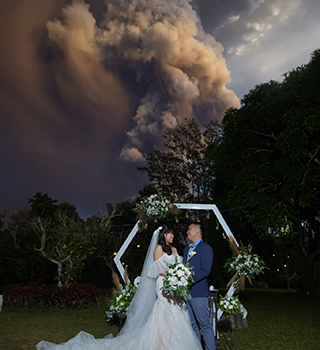 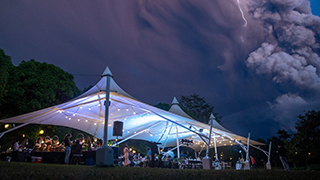 As smoke filled the sky and ash spewed from a volcano in the Philippines, hundreds of flights in and out of Manila were cancelled. At the same time, a couple went through with their outdoor wedding — and captured stunningly beautiful photos in the process.

The couple said "I do," last Sunday, 15 km away from the volcano. By that time, ash from the eruption reached Manila, forcing the airport to close and more than 500 flights to be cancelled. The danger level was raised to Level Four, which indicates “a hazardous eruption within hours to days was possible.”

The wedding photos captured by photographer Randolf Evan are pretty surreal. The couple exchanges vows and the wedding is celebrated under a tent as the sky above roils with ash, smoke and lightning.

"We were actually nervous because while working we kept on checking social media for updates on the volcanic eruption. So we were actually aware of the warnings and escalating levels that was being announced real-time," Evan told CNN. "We also discussed discreetly among ourselves what we should do when worst comes to worst."

According to The Associated Press, citing the Philippine Institute of Volcanology and Seismology, the start of activity in the Taal volcano was sudden, initially spurting steam, ash and pebbles up to 15 km into the air.