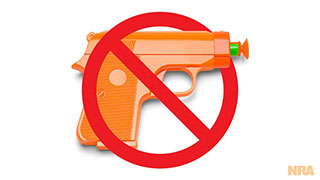 A startling total of 4,432 gun were seized at airports across the United States last year – that's more than ever before in the Transportation Security Administration's 18-year history and represents a 5% increase over 2018, according to the agency.

And not only that, but 87% of the firearms found last year were loaded.

"The continued increase in the number of firearms that travellers bring to airport checkpoints is deeply troubling," said David Pekoske, the TSA's administrator, in a press release.

You'd think responsible gun owners would know that there are proper ways to safely and legally transport guns on a flight.

While travellers, even with permits, cannot carry guns onto an airplane, properly permitted gun owners can travel with their firearms in checked luggage if they follow TSA and airline guidelines.

"There is a proper way to travel safely with a firearm. First and foremost, it should be unloaded. Then it should be packed in a hard-sided locked case, taken to the airline check-in counter to be declared, and checked," explained Pekoske.

Replicas are banned by the TSA as well – remember those detonator-shaped Star Wars Coke bottles that were prohibited? -- since they don't want flight crew wondering about that toy gun or grenade.