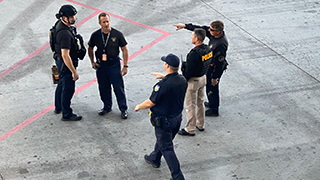 Here's what not to say when you miss your final boarding call at the airport and want to try to sweet-talk your way on anyway: “There’s a bomb in my bag.”

A woman flying from PHX missed the final call for her flight, making it to the gate seconds too late. With her checked baggage already on board, she tried repeatedly to weasel her way onto the plane.

Katie Hinsen, a fellow passenger flying to Salt Lake City to attend the Sundance Film Festival, took to Twitter to share the details of the outrageous incident.

"My travel to @sundancefest has been delayed because of a privileged white lady who pulled some *shit*," Hinsen tweeted.

"Plane was closed and about to leave when woman approached the gate. She’d been chilling in the lounge and missed her flight. Was told she would be on the next one her bag would meet her in SLC. She was NOT HAVING IT.

"She’s apparently an elite member and frequent flier. She demanded her bag be taken off the plane or she be let on. She was told 'no'."

According to Hinson, the lady resorted to threatening the gate staff and, in a last-ditch effort, she "mustered all her drama and said the words, 'there’s a bomb in my bag.'"

Well, she got what she wanted. Her bags were indeed taken off the plane. However, she was also escorted across the tarmac to a cop car, and the plane was cleared as the bomb squad did a sweep, wrote Hinson.

ABC15 confirmed that Phoenix police were called to PHX to deal with the passenger while the Phoenix Bomb Squad had to sweep the aircraft and make sure the threat had no substance to it.

Sources said the lady was arrested and booked at a jail for “false emergency reporting, a class one misdemeanor, and for making a false terrorism report, a class three felony."